December 2013 saw GKL Group undertake the Woodston Primary School project, an expansion of the existing site in Peterborough. As grounds and construction works were undertaken, so did an unusually wet winter come into play, followed by equally challenging weather conditions during the springtime of 2014. 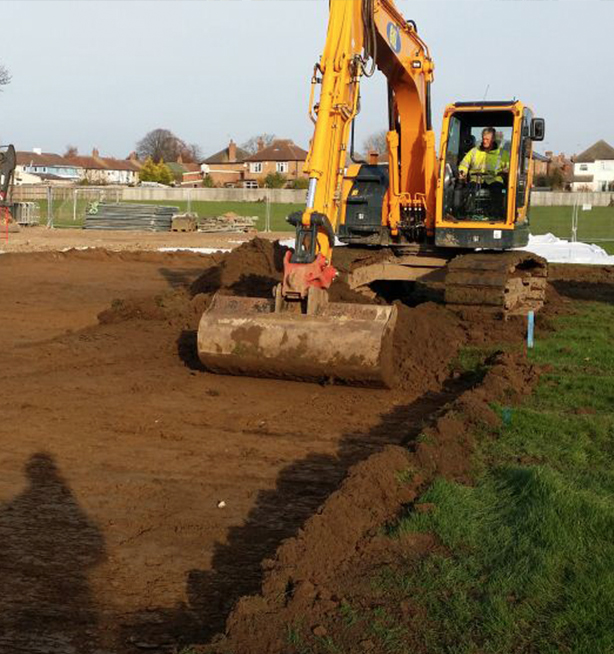 The first items to be prepared for at Woodston Primary School were the new Car Park and Children’s Playground areas. Once constructed and strengthened the latter would provide base for mobile cranes, which in turn were used for further building works. The winter downpours cause the strip foundation of the new car park and playground to be completely flooded on two separate occasions. The foundation needed 150m3 of concrete to be laid down to the very highest standard. Following that, the GKL team continued onto reinforcing the floor slab. At the same time, drainage was installed. The first day of dry weather in spring 2014 allowed for completion works on the floor preparation to be finished and the floor slab to be finally poured. Thereafter, the building’s steel frames were erect, allowing the project to continue on track.

Returning back to the site in June, the Woodston School Project had started to take shape as originally planned. The footpaths surrounding the build were first laid down,  graded and block paved, as well as soiling the remaining garden areas. A clever feature of the project is a pond excavated by GKL, which collects the surface water from the extension roofs, playground and car park. The pond features a flow controlled outlet, this has been achieved using a Hydrovale. The Hydrovale prevents the drains in the local area from being overwhelmed in periods of heavy rainfall and has given the children of Woodston Primary School a fantastic new addition in which they are able to explore nature.

This project will be completed and suited for occupation at the beginning of the new school year in 2014.

Derek Vincent  from GKL Group went onto explain “These types of engineering and construction projects can be very dependant on mother nature in terms of hitting timelines, I am pleased with where we have gotten to and the finish and quality of the end product, it was a real pleasure dealing with Woodston Primary and this type of community project is one of the reasons I am so pleased to be in the civil engineering space”.