"It was a weekend that really did epitomise the three key words of our wonderful company – Passion, Process, Value" – James Brackenbury, Director. 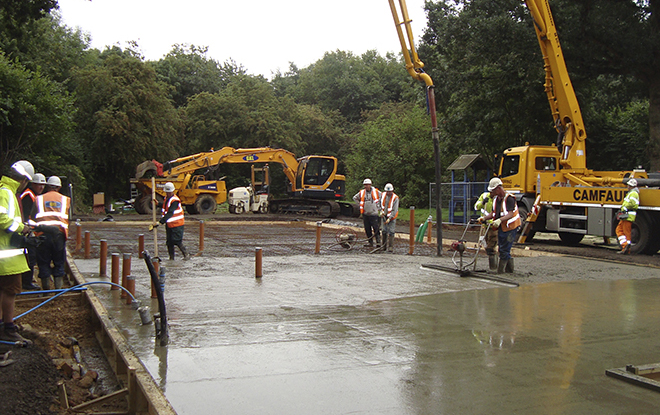 After receiving a call from the BBC in late July 2013 regarding the filming in Peterborough of DIY SOS: The Big Build, GKL Group immediately volunteered to be part of their production companies biggest project to date.

The project, the largest of its kind undertaken by the BBC’s DIY SOS team is to create a new purpose built centre for a local Peterborough based charity called ‘Little Miracles’ and will provide a facility forlocal disabled children and their families to use – www.littlemiraclespeterborough.org.uk

GKL Group has it’s head office in Peterborough and with a predominantly local base of employees we were more than happy to assist such a great and worthwhile cause. After meeting with the BBC production team we quickly agreed to undertake the demolition of the existing building locally known as the ‘Spinney’ and construct all of the associated groundwork’s for the new building.

From the demolition last Monday (9th September), under the watchful eye of DIY SOS’s Nick Knowles and Mark Miller, to 2pm on Sunday 15th September the existing building was removed and all of the new infrastructure and foundations laid ready for the new building to be constructed which was no mean feat for 5 ½ days work!

The weekend of the 14 & 15th September 2013 saw a gargantuan effort from all involved, through sunshine and rain, with all members of the GKL team giving their time for free and some travelling long distances from our other projects in Colchester, Essex to volunteer and be involved.

With everyone gathered together contracts manager Phil Hopkins explained what we were doing and the excellent charity that would ultimately benefit from the project and following this everyone went away and merrily got on with the tasks at hand – all with a smile on their face and plenty of humour and banter along the way.

Office staff mixed in with groundworker’s and even the directors were spotted with shovels in their hands – it really was a true example of teamwork!

"I have always viewed GKL as a ‘family company’ with each and every employee a part of that extended family and this weekend with so many volunteers giving up their precious time just proved how true this really is. I was proud of each and every one of the team involved and was honoured to stand side by side with them this weekend" – Eamonn Killoughery, Managing Director.

Sunday morning arrived and with sunshine and blue skies the foundations were ready and waiting for the concrete to be delivered and poured. One by one the team arrived, full of good spirits and humour once again ready to complete the challenge in front. As the concrete deliveries progressed the weather deteriorated but it would have taken more than a drop of rain to dampen our spirits.

By 2:00pm the works were complete and the first stage of a remarkable transformation was completed! The GKL team will be back in a few weeks’ time to see the big reveal and witness the final product.

Obviously a huge thank you goes out to each and every member of staff that was involved in the project but also special thanks need to be extended to our key supply chain who have kindly and generously donated materials and services for free to make this project happen.

So in no particular order a very large thank you to;